Privacy and the Profit Motive: “If you’re not doing anything wrong then you should have nothing to hide.”

The average American living in the digital age willingly hands over dozens of snippets of very personal information to a host of strangers on a daily basis. Sometimes knowingly, but more oftentimes not. Those snippets are then recorded, reconfigured, and redistributed in ways that few people really understand.

The United States presently has the weakest information privacy laws among all of the advanced democracies. So how did we get here? Did we not see this coming?

This lecture examines the history of large-scale data collection in America from the first census in 1790 to the present day. Topics will include the rise of the welfare state, the advent of mainframe computers, early social and political debates over data privacy and protection, the many problems inherent to the misuse of personal data, and what privacy advocates are presently doing about all this. Front-and-center will be an examination of the all too familiar statement: “If you’re not doing anything wrong then you should have nothing to hide.”

Irresistible: The Rise of Addictive Technology and the Business of Keeping Us Hooked by Adam Alter

“As if to prove his point, Adam Alter has written a truly addictive book about the rise of addiction. Irresistible is a fascinating and much needed exploration of one of the most troubling phenomena of modern times.” 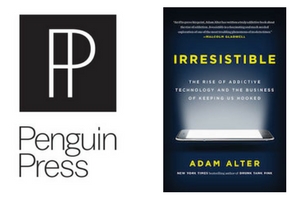 Lawrence Cappello is a Professor of Constitutional History at the University of Alabama and the author of None of Your Damn Business: Privacy in the United States from the Gilded Age to the Digital Age. His essays have appeared in The Wall Street Journal, The Atlantic, and The Nation. He was recently profiled by The Economist.

Venue: Strand Bookstore
Add to Calendar Feb. 17, 20177 p.m. Feb. 17, 2017 America/New_York Think Olio | Privacy and the Profit Motive: “If you’re not doing anything wrong then you should have nothing to hide.” None